Julian Cincotta is one of Australia’s most promising young chefs, setting trends in the fusion of food, booze, music and culture. At 15, he first discovered his passion for cooking by working at his parent’s western Sydney café. He went on to hone his knowledge and skills under chef Neil Perry at fine-diner Rockpool, and was part of the first kitchen teams at Rockpool Bar & Grill in both Sydney and Melbourne. Soon after, he headed abroad to stage at such top restaurants as Charlie Trotter’s, Alinea and Blackbird.

In 2013, Julian stepped into the role sous chef at Sydney restaurant Nomad. It was there he came to the attention of the industry, winning the prestigious Josephine Pignolet Young Chef of the Year award in the 2015 Good Food Guide. It brought him a host of opportunities, including a creative partnership with Middle Eastern-focused Thievery restaurant in Glebe – a connection that’s become a lasting partnership. Through his Young Chef prize, Julian spent a six-month stint overseas, immersing himself in European cuisines, including stages at Saturne (Paris), Lyles (London) and Bror (Copenhagen).

On his return to Sydney in 2016, Julian joined the Thievery team to work on an exciting new project. They launched the cutting-edge Butter, the world’s first hybrid sneaker, fried chicken and champagne bar, all with a hip-hop beat. From the very beginning of its operation, Butter gained amazing recognition both in Australia and internationally for its innovative approach to dining and the merging of distinctly different cultures. The team opened its second Butter in Parramatta in late 2018 – a flagship outlet combining the original food and beverage concept with a full retail store selling kicks and other apparel and lifestyle products. Butter also runs pop-ups and collaborations at various Sydney locations.

When he’s not in the kitchen, Julian enjoys collaborating with some of Australia’s leading brands and businesses, including the 2018 #HOWWEHENNESSY campaign, the 2018 Virgin Australia Gigantic Giveaway, and the 2019 launch of the Mazda CX-5. He hopes to continue changing the way Australians perceive, indulge, and engage with food and urban culture. 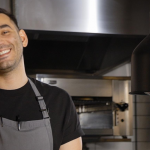